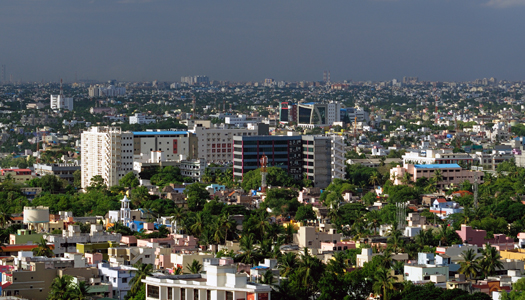 Buying an apartment in a metropolitan city like Chennai is certainly not a piece of cake! While you ought to be particular about the property pricing, financing and facilities, there is the hulk challenge of zeroing in on the right location to get your dream flats in chennai which we shall guide you end-to-end with.

OMR also referred to as the Rajiv Gandhi Salai is a renowned IT Expressway in Chennai city. This is a key road that connects main Chennai city with that of Mahabalipuram. on the whole, OMR is a road of 45km stretch. It runs between Madhya Kailash Temple and ECR close to Mahabalipuram. Along the OMR, you have a host of apartments in OMR besides myriad of IT companies, BPOs, IT/ITES firms, and a lot of educational institutes including colleges and schools.

A much populated neighborhood of Chennai city lying along the south. It is a posh locality. It was originally a Panchayat Town, and now evolved into Selection Grade Municipality. Thanks to ginormous developments in terms of residential like flats in Tambaram as well as commercial aspects. The neighborhood is notably divided into East and West Tambaram.

A posh residential locality in Chennai city that falls under Chengalpattu district. Here, one could easily find a host of residential settlements like apartments in Pallavaram and it is known for the cantonments. It is currently a Taluk and governed as selection grade Municipality. It is broadly divided into Zamin, Essa, Cantonment and Old Pallavaram.

Chrompet is undoubtedly Chennai’s bustling shopping hub with elite stores and commercial complexes and flats in Chrompet dotting all around. Chrompet lies on either sides of the GST road. You may reach the destination at just 22km distance from the Chennai Central railway station at in just 4km distance, one may reach the Chennai International Airport.

Recently in 2019, Avadi was included under the Municipal Corporation and suits residential settlements with several apartments in Avadi. Towards the west of the city it lies and you may travel to the Chennai Central railway in just 15 minutes of drive. This falls under the Thiruvallur district and gets surrounded by the main defense establishments and a number of colleges and universities here.

Ambattur lies along the northwest of Chennai city and functions as Ambattur Taluk. The locality is encompassed by Anna Nagar, Mogappair, Avadi, Padi and Kallikuppam altogether. The total area of the neighborhood is 45 sq.km. As far as the commutation facility is concerned, you have the Ambattur Railway Station for seamless connectivity to the flats for sale in Ambattur.

Flats for sale in Vanagaram - Yet another residential locality of Chennai city along the northeast. This is among the regions of the city that is experiencing rapid development. The settlements at flats, Vanagaram here are of smart and affluent kinds. There are a myriad of commercial hubs and educational hubs in the neighborhood.

Porur is notably a residential neighborhood of Chennai city. It is governed under the Chennai City Corporation. The neighborhood gets its drinking water needs met from the main Porur lake which also caters to the needs of Moulivakkam and Mangadu for flats in Porur. Porur has the landmark Ramachandra medical college. It currently exists as a compact village falling within limits of Saidapet.

Apartments in Perungalathur - One more residential locality lying towards the southeast of Chennai city. You get your commutation needs met with the Perungalathur Railway Station. And there is the main Perungulathur bus stop to board to buses plying across districts and states including Kerala. The neighborhood with apartments, Perungalathur is also popular for the presence of 800-year old Shivan temple.

Guduvancheri or Guduvacherry is a notable Panchayat town functioning under Chengalpattu district. This belongs to Chengalpattu Taluk. Coming on to the connectivity needs of this neighborhood, you have the Guduvanchery Railway Station that is a part of Suburban Railway services of Chennai city. This is among the preferred locations to make residential settlements in Chennai in flats in Guduvanchery.

Leave a Reply
Your email address will not be published. Required fields are marked *
Related Blogs
Localities in OMR